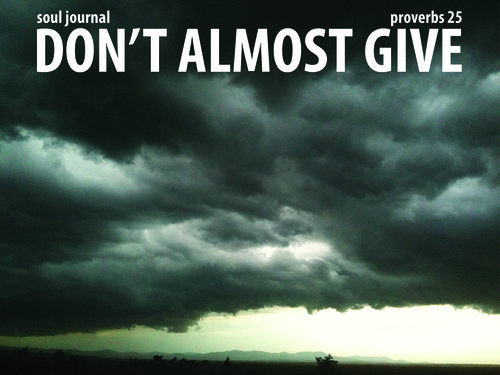 Like clouds and wind without rain
is one who boasts of gifts never given.

Observation – What does it say?

This proverb speaks against the person who announces they are going to give but never follows through.

Understanding - What does it mean?

There have been many times that God has put it on my heart to give. Extra money comes in and I tell God, "I’m not going to spend that on myself but I’ll give it to the person you have brought to mind." There have been times though, where I haven't followed through. Whether I allowed myself to forget about it or I deliberately spent it on something else, there have been times I have almost given.

The truth is, whether it’s material or financial or a gift of time spent with someone or a gift of doing a favor to help someone, no one benefits from good intentions. The only gifts people benefit from are the ones that are actually given.

People who almost give are likened to clouds and wind without rain. Last week we had some cooler, cloudy and windy days that many Southern Californians were hoping to see rain from. The dark clouds rolled in but many of those clouds only ended in disappointment because they didn’t release a single drop of much desired water.

We’ve all met people who say they will do something or give something and don’t follow through. And, if we’re honest, we’ve all been that person at times too.

Just as people don’t delight in those who almost give, God doesn’t either.

When you vow a vow to God, do not delay paying it, for he has no pleasure in fools. Pay what you vow.

God, forgive me for the times that I have failed to follow through with my commitment to give to you or others. I don’t want to be like clouds that only get people’s hopes up and end up disappointing because I fail to give. Please bring to mind any commitments I’ve made to you or others that are still outstanding so I can make them right. And in the future, give me the determination and conviction needed to carry out my commitments. Amen.