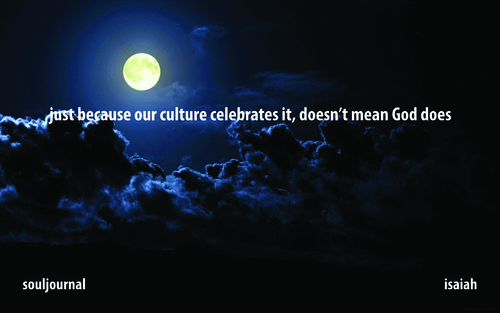 The look on their faces testifies against them;
they parade their sin like Sodom;
they do not hide it.
Woe to them!
They have brought disaster upon themselves.

Observation - What does it say?

The people of Judah and Jerusalem were living in sin. And, it had progressed from being something done in the dark, in secret, to being done openly for all to see. They paraded and displayed their sin publicly without shame and it defied God’s glorious presence among them (verse 8) and brought disaster upon themselves.

Understanding - What does it mean?

Just because the culture accepts sin doesn’t make it acceptable to God.

I watched The Italian Job back in 2003 when it made its debut. In the movie, a team of criminals assemble to pull of a crazy heist to steal $35 million in gold bars. I remember walking out of the theater thinking it was a great movie. A few hours later it hit me. “We have come to praise people who do bad things well.”

Our culture has become one that glorifies sin. The top 40 charts are littered with songs positively portraying sexual immorality and substance abuse. People all over the nation stand in ticket lines, handing over money, to be entertained with films filled with sexual content, foul language, violence, unfaithfulness and other things God detests. Homosexuality, once frowned upon by most and kept mostly in the dark, is now something celebrated and commended in our culture.

It’s this drift from holiness to sinning in secret, to sinning in public without shame and praising those who sin well is what brought disaster to Sodom. It’s what led to the destruction of Jerusalem.

Make sure God’s Word is the measurement for acceptable living, not the culture around me or even my own opinion.

God, please protect your church from being influenced by the ungodly beliefs in our culture. Fill us with a passion to live holy lives that are pleasing to you! Reveal to us any ways our culture has influenced us into believing some sin is acceptable. And, have mercy on our nation! Please turn the hearts of people to you and bring us to repentance rather than destruction. Amen.