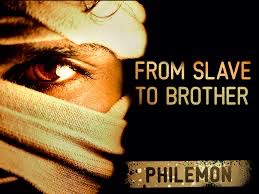 OBSERVATION: (What does it say?)

This book was written by Paul to a dear friend and worker of his, Philemon. Philemon was a slave owner and Paul was returning Onesimus, his runaway slave, to him. Onesimus had runaway after stealing from him. Paul spent some time with Onesimus, led him to Christ and is now bringing him back to Philemon. He is pleading with him not to punish him, but rather to treat him as a brother, especially now that he has accepted salvation in Jesus Christ. (Reference for background info is: gotquestions.org/bookofPhilemon)

UNDERSTANDING: (What does it mean)

Something I continue to notice about Paul is how much he loves the people he leads and serves. The way he pleads with Philemon and appeals to him as his brother with love instead of harsh authority proves this (see vss. 8-9). Also the way he pleads for him to accept Onesimus back with grace, love and forgiveness also proves this.

Paul understood this type of forgiveness first hand. He used to persecute Christians when he was Saul, but after receiving salvation, he became a completely different man. I believe Paul chose to be Onesimus' advocate because he witnessed the same type of change and regeneration in Onesimus that he experienced as a result of faith in Jesus Christ. Because Onesimus had become part of the family of Christ and had experienced the grace and love of God, Paul wanted Philemon to extend that same type of grace to him.

Who do we need to extend grace, love and forgiveness to today? We are not slave owners like Philemon was, but we all have authority over people whether we are married, parents to children, supervise a team at work, a leader in the church, or spreading the Gospel to the lost. May we never lose sight of the fact that because we are servants of Jesus Christ, we are called to treat our family and those Christ has blessed us to have leadership over, with love, forgiveness and respect. That's what Jesus (our Master) does for us everyday. He loved and served us to the point of laying down his life for us. Thank you Jesus and may your example encourage us to do the same with the people you have called us to lead. Amen.

It may be a bit tangential but the thing that struck me as I read Paul's letter to Philemon today was that for Paul, ministry was always in a team context.  He was not a lone ranger.  From the greeting Paul writes to Philemon on behalf of Timothy and himself.  The reality was that the letter was really more from Paul's heart, but Paul was constantly about the team operation.

He also includes others of his "fellow workers" in the closing remarks.  Paul set an example to us and truly modeled out what it meant to do ministry as a team.  In the letter, Paul is encouraging Philemon to forgive Onesimus and team up with him for the work of ministry.  This issue of forgiveness is important when we deal with working together as a team because ultimately team members disagree and there are hurt feelings and offenses.  In order to be effective in multiplying  Christ-followers everywhere we must learn to forgive one another, put aside offenses and work together so that God's purposes can be accomplished.

For those in the family at DSC, God has placed you here so that you can be a functioning team member.  Together we can be very effective in reaching, recruiting, resourcing and releasing people who are multiplying Christ-followers.

So how are you functioning as part of the team?
Are you using your gifts, talents, time and money as a fellow worker here at DSC?

It always amazes me when I learn about God's character...through other people.  I often feel that it is impossible to live up to God's standards in life (which is true, if it is only me trying).  Philemon gives a great example of how God can renovate a person's heart towards people.  Taking a look back at the then Saul, one can see how condemning and strict he was.  Since the Christians followed someone thought to be different from the Jewish faith, Saul thought they had to die.  What is so encouraging is that, after a touch from God, Paul is now seen defending someone (Onesimus) who has done wrong in the past, but realizes God's heart for the people.  If this is coming from a human, how much more does God do this for us.  Astonishing how much I sometimes take this for granted.  I deserve death, no less.  But God has pardoned me, through the sacrifice of his son, from all my sins.  Wow... I can't fathom such a love, such a God.

Another thing is how Paul wants Onesimus to be reinstated into his original position.  I also find this true for me and my walk.  God brings us out of our sin to reinstate us back into his army.  God want me to work for him, and is willing to forgive me for past errors and decisions.  All I can say is I am amazed by God.